I just spent a few hours reading, enjoying, relishing The Invention of Hugo Cabret by Brian Selznick. Amazing. It's a story told in words and in pictures, where the pictures are sometimes just pictures and sometimes create a mini-movie inside the book. Did I already say it was amazing?

The book tells the story of 12-year-old Hugo, an orphan who is a whizz at fixing clocks and anything mechanical. He manages to fix an automaton and through it discovers a picture that changes his life forever. It's a story of the magic that can happen in real life.

There are also non-fiction elements to it, but I don't want to talk about details because they are not revealed until the second half of the book. Just know that there is some information on the beginning of cinema and that I now need to read something on the subject.

The drawings are absolutely beautiful and I love the way each of them brings the story forward and then text takes over. Everything works so well together.

I absolutely had to jot down this beautiful and wise passage, something Hugo says to his friend Isabelle:

Now, why did I call this post 'pure indulgence'? Because I'm having a really bad week, which is why I'm at home able to read books. I almost fainted at work on Tuesday plus had an anxiety attack and was taken to the emergency room. I seem to be ok for now, though I have to get some tests done, but it was scary and I'm at home resting for a while. The most likely reason for it is stress and fatigue, fingers crossed that's all it is!
Posted by joanna at 1:18 PM 9 comments: Links to this post 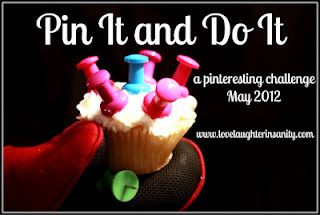 I love making lists. Many of them are only in my head, like a list of hobbies I'd like to take up (violin, crochet, sewing) or the list of cookery skills I'd like to try (making my own pizza dough, pickling something, baking bread). Some are transferred onto paper, like lists of books I want to read (on Goodreads and on this blog) or lists of recipes I want to try (cut out from magazines and pasted into a notebook).

I love inspiration. I look at magazines and I feel inspired to grow my own tomatoes, to put up shelves, to reorganize the kitchen. And to live better.

I love Pinterest (an online pinning board where you collect ideas from around the web). It satisfies all this in me and gives me hope that someday, somehow, I will find the time to put all the inspiration out there into action.

The problem is that although I pin every day, I rarely make anything I pin. For this reason I feel that I need to join Trish's new challenge: Pin It and Do It. Since the challenge is quite short, it ends at the end of May, I'm signing up for the middle level and vow to make or do 4-7 things I pinned.

I'm not making any lists for this one, we'll what inspires me most!

Want to see what I'm choosing from? Here's a link to my Pinterest dashboard. Not on Pinterest? Let me know if you need an invite and I'll send one.
Posted by joanna at 10:40 AM 7 comments: Links to this post

It doesn't look like I'm getting any closer to reviewing the books I've read this year. I think I need to accept that unless I do it right after I finish the book it's just not going to happen. So I'm stealing something I saw over at Trish's and am asking for your help.

Ask me anything about the following books and I'll answer your questions instead of doing a conventional review post.

Love Walked in by Marisa de los Santos
The Help by Kathryn Stockett
The Absolutely True Diary of a Part-Time Indian by Sherman Alexie
Neverwhere by Neil Gaiman
Twenties Girl by Sophie Kinsella
I don't really remember details of some of what I though of some of these so hopefully your questions will help!

One Last Summer by Catrin Collier

A very touching book about World War II, told from the perspective of a young German girl. 18-year-old Charlotte von Datski thinks she has it all - she lives in a beautiful house, comes from an aristocratic Prussian family and just got engaged to a count, a handsome man she has been admiring for a long time. But not only is she in for a surprise about what is expected of her once she becomes a wife, all this is happening in 1939 and the world is on the brink of war.

From day to day, Charlotte starts losing people she loves and is forced to grow and take charge of running the family home. She lets go of her ideals and her dreams and just tries to survive the horrible years of war. When the war ends and the Russians take Prussia, she flees west.

The story is not unlike so many horrible tales of those who survived the second World War. But it is the more engrossing because it is told by someone so young. The fact that it's told from the German perspective add a lot of value too - Charlotte is just a regular young girl looking out for her family, with no interest in politics and no racist beliefs. And yet, she is not allowed to stand to one side, she is forced to get involved and the side is chosen for her from the start.

It was strange for me personally to read this book, being Polish. East Prussia ceased to exist after the war and those lands are now part of Poland. Poland got land after the war ended, but it had so much of it taken away too. It's so unfair - and seems completely crazy - that politicians and armies could divide lands arbitrarily like that. It's so sad that so many people - not just in this conflict of course - have to leave their homes and their country like that. That can never be ok.

I was surprised by how powerful this book was and by what a page-turner it was too. I couldn't put it down, I didn't want to go to sleep at all. Despite the fact that I pretty much knew how it turned out, I needed to know for sure what came next.

The story is based on the lives of the author's mother and grandmother, which makes it more engrossing. I can't believe that real people lived this story. I can't imagine ever having the strength to go through what they went through, but I suppose people are strong. You continue on and tackle whatever is thrown your way.

Now on to happier books I think!
Posted by joanna at 6:47 PM 4 comments: