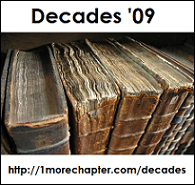 I thoroughly enjoyed doing the Decades '08 challenge and found that it really made me read outside my comfort zone - so I'm definitely in for Decades 2009 hosted by Michelle from 1MoreChapter.

The challenge is to read a minimum of 9 books in 9 consecutive decades during 2009. All the rules are on the challenge blog. I can't seem to decide on my decades so I'm going to do a longer list of possibles and see how I do. :-)

You've got some good books on there!

I couldn't make up my mind so listed way too many! ;-)