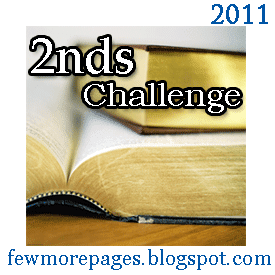 Katy from A Few More Pages is hosting the 2011 Seconds Challenge. There are too many authors I've only read once, so this one will be good for me. The books can be second ones in a series so that should help some of those series I started too! :-)

There are several levels and I'll be going for "A few more bites", i.e. 6 books. A list of possibilities is below.

The Book of a Thousand Days by Shannon Hale (I read The Goose Girl)
A Monstrous Regiment of Women by Laurie R. King (second in the Mary Russell series, after The Beekeeper's Apprentice)
The Dogs of Riga by Henning Mankell (second in the Kurt Wallander series, after Faceless Killers)
Ink Exchange by Melissa Marr (I read Wicked Lovely)
Tuesdays with Morrie by Mitch Alborn (I read The Five People You Meet in Heaven)
The Likeness by Tana French (I read In the Woods)
Two Caravans by Maryna Levycka (I read A Short History of Tractors in Ukrainian)
The Glass Demon by Helen Grant (I read The Vanishing of Katharina Linden)
What I was by Meg Rosoff (I read How I Live Now)
White Teeth by Zadie Smith (I read On Beauty)
Ludmilla's Broken English by D.B.C. Pierre (I read Vernon God Little)
Redemption Falls by Joseph O'Connor (I read Star of the Sea)
something by Sarah Waters (I read Fingersmith)
something by Elizabeth Strout (I read Olive Kitteridge)
something by Emma Donaghue (I read Room)
something by Jane Yolen (I read Briar Rose)
something by Banana Yoshimoto (I read Kitchen)
something by Octavia E. Butler (I read Kindred)
Posted by joanna at 12:06 PM

I’m actually going to read the 1st of four of the authors you listed (King, Grant, O’Connor and Butler), three of them your recommendations :)

I'm kind of unofficially participating in this challenge...it inspired one of my reading goals, which is to read second books by authors I've read once and enjoyed. Tuesdays with Morrie was the only one of Albom's books I really liked, so I hope it works out for you!

Alex - That's true actually, we'll be reading some of the same authors. :-)

Erin - I figure even if I don't finish it's still good to try and read more by the authors I liked. So even one of this list will be a success!

A truly motivational and life changing book
This book is really a good book which shows us right path. but i read
one more book named "ONE BOOK FOR LIFE SUCCESS" which is truly
motivational and life changing . .The writer has described in Plain
English with lot of examples which is easy to understand...For More
Please watch the videohttp://www.youtube.com/watch?v=biORjS8ngv0