Please, give me some gluten-free and dairy-free ideas, I'm going crazy trying to figure out what I can eat! :-( Anyone have any favorite meals or snacks that would work here?

Anyone in the same situation and can give me some thoughts on what to order when eating out??

It's becoming less of an adventure and more of a pain. On the plus side, it seemed to be working until I cheated slightly and my skin got worse again. Sigh.
Posted by joanna at 1:31 PM 10 comments:

Whip up something new - Tahini and cider vinegar dressing 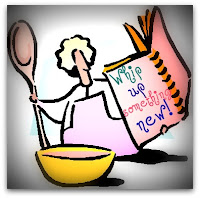 I haven't finished a single book so far in May. That's right. Not one. Zilch. I'm reading several at the same time, but I guess none have grabbed my attention. I may have to resort to trusty YA to get things going again. How bad is it that I only seem to connect with teens at the moment? ;-)

Actually, instead of reading I've been doing other things. I was in a local production of Kurt Weil and Bertold Brecht's Threepenny Opera at the beginning of May. I'm rehearsing for a mini-show in June, as well as for a couple of things I will be performing during our handfasting in a few weeks. And I'm preparing for auditions for Hello, Dolly - I want one of the few female roles, but will be happy with just chorus too. That's a lot of singing, preparing, extra voice lessons and therefore evenings out of the house. I'm lucky that Joe hasn't minded staying at home with Baby S!

I've also been concetrating on food and health. I have a skin condition called psoriasis. I've had it for years, but it was more or less manageable. It went away when I was pregnant, which is normal because auto-immune conditions always do. But it came back with a vengeance after S was born and hasn't really been manageable since. It's been getting worse and worse and more itchy/painful than ever.

I started doing some research and found that many people who suffer from psoriasis (not all but many) we're  helped by going on diary-free and gluten-free diets. So that's what I'm trying. It's hard. Especially since I started this new way of eating without too much preparation, so fixing meals is a daily struggle. It's not coming naturally. But, after a week of doing it, I can see a real improvement on my skin. Isn't that amazing? It's so motivating to see results that fast! I'm nowhere near completely healed, but I now have high hopes.

So onto the dressing. My friend Larissa, who is vegan, was over at our place with her family this weekend. I asked her for any staples she uses that I could possibly incorporate into my new diet. I was sitting in front of a place of grated carrot and cabbage and was wondering how I could liven it up. She told me that she often uses a tahini-lemon dressing from Alicia Silverstone's book The Kind Diet (which I have now ordered, by the way). I tried it and it was fantastic.

The next day, I combined it with elements of another dressing I used to make for a similar salad, though that one also had ramen noodles and spices. And this fantastically tasty dressing was the result:

I'm sorry I can't be more specific, but you just have to experiment and do it to taste. The result is sooooo good though - a bit sweet, a bit tangy, a bit spicy. Perfect on all sorts of veggies!

Whip up something new is an ongoing challenge with a rotating host system. Kristi is our host for May, make sure you visit this post and check out the other entries!

Does anyone want to host for June?
Posted by joanna at 9:31 AM 4 comments: