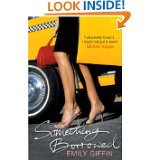 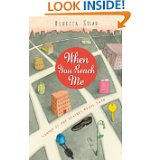 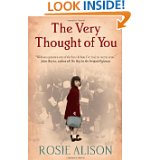 The Very Thought of You by Rosie Alison
Disappointing. I liked the premise - the main character, Anna, is one of the children evacuated from London during World War II - but I didn't really care for the execution. I found the characters flat and their motivations lacking. And to be honest, I thought that some of the attachments made in the story were rather creepy... I won't mention details of course, I don't do spoilers. :-) All in all, pretty much forgettable.
Posted by joanna at 2:49 PM

I loved both Something Borrowed and Something Blue. Definitely make sure to read the latter. As for the movie, I actually liked it. The actress that played Rachel irritated me a little, but Kate Hudson was wonderful as Darcy.

I wasn't a big fan of The Very Thought of You either and I agree - some of it was a bit creepy :-(

reviewsbylola - ooh, I was wondering if the next book was any good, thanks for the tip! I'll watch the movie for sure, I coudl never resist no matter what people were saying! :-)

Really? When you Reach me didn't strike me as anything like The Time Traveller's Wife. If I heard that at the time I wouldn't have liked the book...

I was disappointed with Very Thought of You too. I didn't really like Something Borrowed either, mainly because the characters were so unlikable. I did like the sequel a bit more though.

I saw the movie Somthing borrowed and quite enjoyed it: light and simple, just what I needed that day.
I didn't know there was a sequel, I'll check it out and probably read it then.

I think there are 17!? Stephanie Plum books! I own the first 13 but have only read the first. Like you I really enjoyed it.

I really liked When You Reach Me, but I would not compare it to The Time Traveler's Wife at all. I thought the former was mediocre until the end, when everything came together. Then my opinion changed, and I just adored the book. Funny how that can happen!

I wasn't a fan of The Very Thought of You either - in fact it's my least favourite read of the year. It's good not to be alone :P

Kailana - it's funny how those sorts of comments really make a difference!

Marg - I liked the characters in Something Borrowed, despite their issues... Looking forward to the sequel now!

Trish - wow, that'll keep us busy for a while!

Erin - I think I just expected too much...