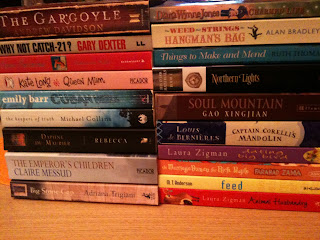 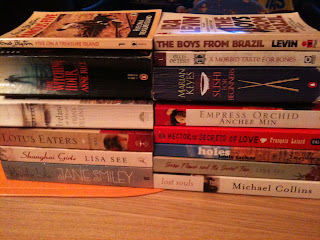 Ha, I have so many of these books on my shelf to read as well, we'll be double posting reviews for years.

First of all, I love the Brother Cadfael Chronicles - they are excellent. And there is a pile of them.
Holes and The Gargoyle are also excellent reads. Holes is really wonderful - my kids have loved it as well, and the movie is terrific.

That is an impressive haul! I love Hay, but didn't buy many books when I went as most were quite expensive. Did you manage to find some good sales?

That would be my limit for the day as well. As for which to recommend first, hard question. I might be tempted by Holes. Have wanted to read that for quite some time.

Wow, that is a lot of great books! Enjoy! I am jealous!

LOL! Never too many books. Though maybe not enough time to go along with those books? ;)

On your own for a day in village full of books?! Heaven!

Captain Corelli's Mandolin is in my top 10 favorite books - looking forward to see what you think of it.

I loved Northern Lights, so I could recommend reading it first, but the tricky thing is it's the first of three books and then you'd have to buy yet more books to get to the end of the story... ;-)

I've only read Feed from your list (which was really good!), but others are on my TBR. Lovely haul!

raidergirl - Oh cool, I thought I heard good things about the Brother Cadfael series, I'm glad I was right. Maybe it was from you even!

farmlanebooks - nah, they were still pretty expensive... But I live in Belgium so buy mostly new books anyway and they were certainly cheaper than new. Plus the whole experience was too fun to pass up! :-)

Heather - I've heard great things about that one!

Trish - omg, I don't think I've read any of the ones I bought there last year even! More reading time would be goooood! :-)

Alex - Joe read it and liked it a lot too!

Larissa - I know, I resisted buying that one for a long time, exactly for that reason... Ah well, if I have to buy more books then so be it, reading is good for you!