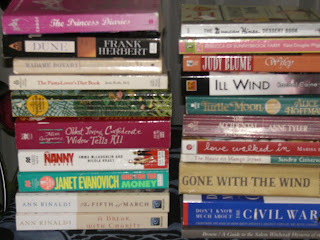 Most of our luggage coming back from the US was books... shocking, eh? Not only did I book or two in every historical place we visited, regular bookstores also called my name. My favorite (besides the giant Borders) was a small secondhand one in Salem - a photo is included in this post. Aside from these, we happened upon a book sale - all books for a dollar. How could I possibly resist? Thankfully we didn't have much cash left or the damage would have been worse.

Here's what I got:

The Princess Diaries by Meg Cabot
Dune by Frank Herbert
Madame Bovary by Gustave Flaubert
Oldest Living Confederate Widow Tells All by Alan Gurganus
The Nanny Diaries by Emma McLaughlin and Nicola Kraus
One for the Money by Janet Evanovich
The Fifth of March by Ann Rinaldi
A Break with Charity by Ann Rinaldi
Rebecca of Sunnybrook Farm by Kate Douglas Wiggin
Wifey by Judy Blume
Ill Wind by Rachel Caine
Turtle Moon by Alice Hoffman
The Accidental Tourist by Anne Tyler
Love Walked In by Marisa de los Santos
The House on Mango Street by Sandra Cisneros
Gone with the Wind by Margaret Mitchell
Don't Know Much about the Civil War by Kenneth C. Davis
A Guide to the Salem Witchcraft Hysteria of 1692 by David C. Brown
Diary of a Wimpy Kid by Jeff Kinney
Native American Songs and Poems , ed by Brian Swann
Woman in the Nineteenth Century by Margaret Fuller
Everything is Illuminated by Jonathan Safran Foer
The Plain Janes by Cecil Castelucci and Jim Rugg
Walden; or Life in the Woods by Henry David Thoreau
Battle Cry of Freedom by James M. McPherson
The Long Way Home by Joss Whedon and Georges Jeanty
No Future for You by Joss Whedon, Brian K. Vaughan and Georges Jeanty
Angel - After the Fall by Joss Whedon and Brian Lynch 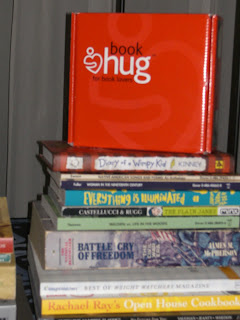 And if you look at one of the photos, the box sitting on top of the books is a Book Hug for Book Lovers. It's just a stand so that you can read while eating or whatever, but what a cool name! Marketing makes shopping in the US such a pleasure, all the creative names for things!

So what do you think I should read first?
Posted by joanna at 7:34 AM

Wow, your suitcase was nearly as full as mine. Book shopping in the states is a blast!

So many books! wow!

I'd say read Everything is Illuminated first, but that wouldn't really be fair because it's the only one I've read :P It is one of my favourite books ever, though :P

See, my people need to see posts like this. I always buy lots of books on trips and everyone thinks I am crazy, but I am not alone!

There are several books on those piles that I wouldn't mind seeing reviews of... Especially the one on Salem...

Most of Judy Blume's books are great, so I'd say Wifey. Or Turtle Moon. Or The Accidental Tourist. I can't decide!

Glad to see my home state had ample book choices for you, the bookstores rock in Massachusetts!!! :)

Did you have to leave your clothes behind so you could fit in all those books? :)

I've been to that bookstore in Salem. I swear, I was a bit worried about my safety there - books piled to the ceiling practically! :)

Lenore - it sure is!

Nymeth - I've heard really good things about that one so it's definitely on the tbr-soon list!

Kailana - we can be crazy together! :-) The Salem one was recommended by the guy who runs the used bookstore there so I expect it to be good.

Iliana - yeah, i was worried too. Especially since every book I wanted seemed to be at the bottom of the piles. ;-)

Looks like a great haul there! I suggest The Nanny Diaries, but I'm biased (used to be a nanny).

Hi Katie - I've actually read The Nanny Diaries before but lent my copy to someone and never got it back. I really liked the book though and wanted to read it again so I bought it!