Living Dead in Dallas by Charlaine Harris and R.I.P.

Living Dead in Dallas is the second book in Charlaine Harris' Sookie Stackhouse series and is just as good as the first book. I'm really enjoying the world that Harris created, the believability of it all. My friend Larissa is currently watching the True Blood series based on these books and calls is 'Buffy for adults' - I guess largely due to this believability (is that a word?) factor. If you like vampire stories, these books are for you. I bought the first eight I think as a boxset from Amazon - it was on sale - so I have loads of Sookie left to savor. :-) 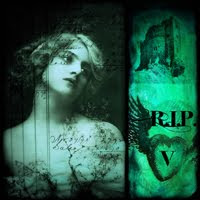 Unfortunately, I read this in August and am just really late with the review, otherwise it would have qualified for Carl's famous R.I.P. Challenge. It's the challenge's fifth year and it looks like the list of fans is growing steadily. As is my list of potential books...

As always, Carl offers various levels of participation - I'm feeling ambitious so will try for Peril the First, which requires me to read 4 scary books. Can I do it?

Living Dead in Dallas by Charlaine Harris
Dracula by Bram Stoker
The Graveyard Book by Neil Gaiman
The Woman in White by Wilkie Collins
The Historian by Elizabeth Kostova
Lonely Werewolf Girl by Martin Millar
The Suspicions of Mr Whicher by Kate Summerscale
The Picture of Dorian Gray by Oscar Wilde
The Forgotten Garden by Kate Morion
The House at Riverton by Kate Morton
The Likeness by Tana French
Room by Emma Donaghue
Posted by joanna at 1:16 PM

Great list, lots of classics there. Mr Whicher goes well with the Wilkie Collins read, as Summerscale refers to Collins in her book.
I'd like to read the Morton and the French book, but the lines at the library are crazy!

Have fun with your picks.

Mr. Whicher and The Forgotten Garden were both really good. I read them earlier this year.

The Historian is on my RIP list as well. Enjoy The Woman in White and The Likeness--both are very good!

raidergirl - thanks for the tip, I'll see if I can manage both of them.

reviewsbylola - Th Historian has been on my RIP list for like 3 years! We'll see which of us actually reads it this year. :-)

Ah heck, I say count it as a RIP read and link your review on the RIP Book Review post! I don't stand on ceremony, I don't see why anyone else should. :)

thanks for joining in on the challenge, by the way.

I think I'm going to try to participate in The Historian Readalong so that maybe I'll actually get to it this year.