Science Fiction vs. Fantasy + a Challenge 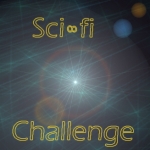 I wanted to sign up for the Science Fiction Challenge hosted by Stage and Canvas and as I started making my list I got very confused about what's science fiction and what's fantasy. I googled and I googled and found that books are considered science fiction of the plot is scientifically possible. They're fantasy if they're scientifically impossible, like if they have vampires and magic in them.

This is all fine for books like The Time Machine by H.G. Wells and Twilight by Stephanie Meyer, it's pretty clear where they should go. But what about dystopian novels like The Hunger Games by Suzanne Collins? It's not really based on science but it could certainly happen... where does it go? And more importantly would it count as one of my challenge books? :-)

What about Jonathan Strange and Mr. Norrell by Susanna Clarke? I always thought of it as fantasy, since it has magic, but I saw it listed on SF booklists? Help!

The Science Fiction Challenge started back in August but it runs until 8 August 2011 so I have plenty of time to explore. It requires either 4 or 8 books - I'm not sure which I'll choose, I'll see how I get on.

Dune by Frank Herbert
1984 by George Orwell
Neuromancer by William Gibson
Speaker for the Dead by Orson Scott Card
Cryptonomicon by Neal Stephenson
Flowers for Algernon by Daniel Keyes
The Island of Doctor Moreau by H.G. Wells
Old Man's War by John Scalzi
The City and the City by China Miéville
The Illuminatus Trilogy by Robert Shea and Robert Anton Wilson
Alas, Babylon by Pat Frank
the Earthsea series by Ursula Le Guin
Mockingjay by Suzanne Collins
Oryx and Crake by Margaret Atwood
The Day of the Triffids by John Wyndham
Uglies by Scott Westerfield
Posted by joanna at 9:52 AM

Just my opinion but I don't think the Hunger Games fits either of those categories (it's dystopian) and I would say that Jonathan Strange and Mr. Norrell is fantasy. But that's just MY opinion and I think that's the point. You decide what you think fits the bill - you're the one reading it after all!

I see books as sci-fi is there are things that could happen in them. So dystopia as The Hunger Games of The Handmaid Tale are sci-fi.

The Time Machine is sci-fi too,only is old sci-fi.

I guess people have different ways to classify them. What does the challenge organizer say?

I define science fiction as anything that features and/or explores advanced scientific or technological concerns in some way, usually (but not always) in a futuristic setting. I'd count THE HUNGER GAMES as sci fi because Katniss's world is the way it is due to the application of disastrous technology; also, the Capitol uses a higher level of technology than we currently possess.

There is an overlap between your reading list and mine (Oryx & Crake, Flowers for Algernon, Day of the Triffids). Looking forward to your thoughts on those.

I just finished Flowers for Algernon and loved it.

1984 is incredible as well, so hope you enjoy that.

I'd count dystopian fiction as sci-fi... I don't know why, but I do! It's futuristic fiction, which leads to another world being created?

Lahni - Jonathan Strange is fantasy in my head... But I'm not sure about the Hunger Games...

Alexandra - I'm pretty sure the challenge organiser says that it's up to you. :-) I agree with you though, that's kind of what I think, if it can happen then it's sci-fi.

Memory - yes, good point, there IS technology in the HUnger Games, it's just background.

anothercookie - I'm sure I looked at your list for inspiration, so it's probably not coincidence! :-)