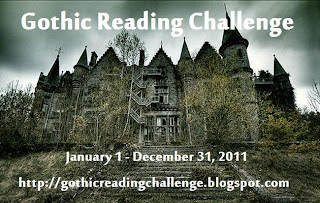 Is it time to sign up for 2011 challenges already? Yay! I didn't sign up for much last year and I missed my lists so I'm definitely going for it this year, whether it's realistic or not! :-)

Susan B. Evans is hosting the Gothic Reading Challenge.  Here's what she says:

There is nothing better than a great Gothic read - crumbling old castles, mysterious legends, shadowy characters, supernatural beings and unexplainable events, make for some of the most haunting and captivating reading imaginable.

There are 4 levels of participation - I'm opting for The Darkness Within - 5 novels with gothic elements. But I might end up reading more, we'll see.

It sounds fabulous, doesn' it? :-) When I started making a list of potentials I went a bit crazy, it seems that loads of gothic books have been on my TBR list for a long time! My possibilities are below - do you have any other suggestions?

The Angel's Game by Carlos Ruiz Zafon
The Castle of Otranto by Horace Walpole
The Fall of the House of Usher by Edgar Allan Poe
Flowers in the Attic by V.C. Andrews
Frankenstein by Mary Shelley
The Haunting of Hill House by Shirley Jackson
Heart of Darkness by Joseph Conrad
The Historian by Elizabeth Kostova
The Hound of the Baskervilles by Sir Arthur Conan Doyle
The House at Riverton by Kate Morton
The House of the Spirits by Isabel Allende (re-read)
Interview with the Vampire by Anne Rice
Jane Eyre by Charlotte Bronte (re-read)
Murder on the Orient Express by Agatha Christie
New Moon by Stephanie Meyer
The Picture of Dorian Gray by Oscar Wilde
Rebecca by Daphne du Maurier
We have always lived in the castle by Shirley Jackson
The Witching Hour by Anne Rice (re-read)
The Woman in Black by Susan Hill
The Woman in White by Wilkie Collins
Wuthering Heights by Emily Bronte (re-read)
Posted by joanna at 7:30 AM