The Odyssey - Check-in the First 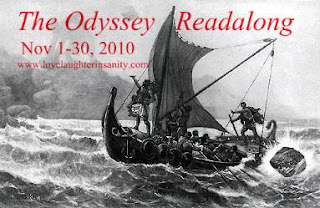 The first Monday of The Oddyssey readalong organised by the lovely Trish has come around far too soon! I only managed to read  four books out of the six I was meant to. Oh well, maybe I'll make up the time this week. Or maybe I'll finish way later than everyone else, but at least I'll have read it, which will be a huge achievement for me!

On this first Monday, Trish posted a short summary of what happened in the first 6 chapters and asked a couple of discussion questions, which I'll answer here.

How does reading The Odyssey compare to my expectations? Well, I was expecting to be bored stiff and I'm not, so that's gotta be a good start. :-) Most of my reading time is on the subway to and from work and I thought that I wouldn't be able to get into it enough. I'm finding it very readable though (the Fagles translation) and I'm enjoying it.

Trish's second question actually addresses one of the things I wanted to talk about anyway, the involvement of the Gods and especially Athena. They're really involved in everything aren't they? Athena especially seems meddlesome in this story, although I must say that I'm surprised by how good she is since most of her meddling aims to help people in need. I suppose someone must help them, since it's other Gods who put them in various complicated predicaments in the first place.

I do find the idea of the Greek Gods great though - that they interact with each other and with mortals and that they really they have lives of their own. The path I follow has similar ideas; this way of thinking really works for me.

But boy oh boy did they like their sacrifices! The sacrifice scenes didn't appeal to me at all, way too gory and cruel. I caught myself thinking that I'm glad that doesn't happen any more. And then I remembered Anya's line from Buffy the Vampire Slayer, about Thanksgiving - "To commemorate a past event you kill and eat an animal. A ritual sacrifice... with pie." :-)

The Odyssey so far is better than I expected. And I haven't even met Odysseus yet!
Posted by joanna at 2:05 PM

I'm glad you're finding it readable, Joanne! I am, too. Though I do wonder if the pacing is too quick. I edited the post after you commented to see if others thought it was too quick as well (though book 5 and 6 seem to go faster).

The Gods are meddlesome aren't they? And yes, they seem to be a great excuse for explaining things away. The idea of strongly believing that gods play such a huge roll in everything in one's life is really fascinating to me--it would be interesting to go back and really understand the idea of Mount Olympus.

Too funny about Buffy. ;)

oh Joanna--not quite up this morning yet. Sorry about the type on your name. :-/

People are often surprised by how accessible the story is; I think we assume it will be horribly complicated language because it's old. :) I'm reading the Fagles translation for the first time, and I have to say it's wonderful!

I agree with what you've said about the gods. I also find it a bit surprising how often they blame the gods, loudly and angrily. They certainly weren't as afraid of the gods as one could assume. Such an interesting relationship.

Trish - the pacing is fine, I'm hoping to catch up by next week!

Trisha - it's true they do get angry with the Gods more often than they would if they were really scared of them... Interesting point.

At this point, Athena's involvement does seem a little refreshing as far as Greek gods go--it seems she has more of a desire to help rather than using humans in some sort of argument between gods. I'm sure things will get a little tense between Athena and Poseidon, though.
I hate the sacrifice scenes too! Much too detailed. Was it a how-to manual for the Greeks, or what?

I'm listening to Ian McKellen read the Fagles translation and am shocked by how much I'm enjoying it!

I, too, was kind of surprised by how much the gods are involved. I wonder, if they're paying attention to one person, does the rest of the world go unnoticed? I'm surprised Athena hasn't given up on Telemachus yet...he seemed kind of whiny to me.

Shelley - yes, a showdown between Athena and Poseidon seem inevitable...

Erin - that's a good point... there were so many Gods though that I guess others were involved elsewhere. And I guess some people were ignored. And Buffy rocks! :-)

softdrink - I'm glad I got it, I already have a version of The Odyssey but it was the prose translation, so I wasn't sure what to do. I love the Fagles though!