A Room with a View by E.M. Forster 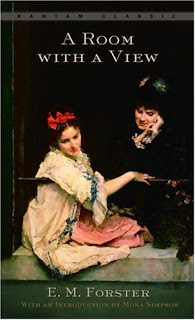 Another book that I had to read for my challenge with Alex, where she gave me five books to read in 2011. I left this one late because I always have trouble starting a classic. I always expect it to be boring and hard to understand and boring. Did I mention boring?

Well, surprisingly, A Room with a View wasn't boring at all. Except in the middle, when I had to put it aside for a few days and read something else. Nothing happened in the middle, it was infuriating! But the first part set in Italy was funny and the last part after George appears again was fabulously refreshing, so I have to say that I really liked it overall. Social comedy at its finest, really.

Lucy was particularly funny, I thought. The way she didn't know how to even think without guidance from someone considered somehow better was written perfectly. I enjoyed her character, including how she grew and developed and somehow managed to become her own person, in spite of it all.

And George! And his father! I loved how unconventional they were, how refreshing in the stifling world of the stereotyped English. I had to read his monologue where he admits he loves Lucy several times, it was so honest and beautiful!

I actually marked down several passages I enjoyed, but only the page numbers and I left the book at home (I'm in Poland for Christmas), so can't share them with you.

Ah yes, my edition finished with a sort of epilogue which the author called A View without a Room. In it he wrote about what happened to all the characters in the following years and I must admit that I didn't want to know. This was a story that for me would have been better left as 'and they lived happily ever after' - I didn't want world wars and such things to enter into it.

But overall, reading this was a great experience, so thank you Alex for encouraging me to read more classics!

Does anyone have any thoughts on E.M. Forster's other works?

Didn't I warn you NOT to read that infamous last chapter that Forster must have written when he was in a mad mood? If not, i should have!

I'd love to know what your favorite paragraphs were later!

Hope all is well on your side of Europe. Here it's sunny and lovely :)

I've only read this and Howards End so far, but I really loved them both. And there's also Maurice of course, for which I have high hopes.