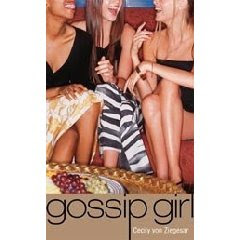 Yea, I finished my first audiobook! :-) It was Cecily Von Ziegesar's Gossip Girl and it was a nice and light introduction to the world of audiobooks.

To be honest, I wasn't expecting much from this book and I didn't get much. I thought both the story and the characters were flat. Maybe I just can't relate. The books tells the story of some spoiled rich kids living in New York. They live in a different world than that of other teenagers and they know it. But their problems are the same - sex, friends, gossip, acceptance. The story went along quickly enough, but I don't really care what happens to the characters next. Ah well, you can't like everything and at least I have something to put in the 2 stars category!

But audiobooks... The idea was to force myself to go walking more often. Originally I put a lot of fast-paced music on my ipod, but music that's good to walk to isn't the sort of music that I like so that didn't go very well. The book thing worked though. I went out on Saturday morning just because I wanted to finish this book! I'm very pleased with the concept and already signed up to Audible.co.uk and got my next one - I happened upon something called The X-mas Factor by Annie Sanders and it sounded interesting - and it starts with X so it's perfect for the A-Z challenge! I was going to cheat and read Douglas Coupland's Generation X or something like that, but I can save that till next year!
Posted by joanna at 10:28 AM

Good for you that you found success with the audiobook! I love them. :)

I saw The X-Mas Factor on Amazon last year, but couldn't find it anywhere (libraries) around me, so I had to give that title up.

Joy - shame about the X-mas Factor, it's so hard to find X titles! Which is why I was willing to cheat a little! ;-)

I think I may use a children's book. Last year, I did the abridged alphabet. :)