Whip up Something New: Banana Cake and Vanilla Cupcakes

I had a blast cooking this weekend! Or baking, rather. Which means I have two recipes to talk about for January's edition of Whip up something new! and for Beth's Weekend Cooking. Yay me!

When I saw the first contribution ever to Whip up something new!, Elise's Old-fashioned Banana Cake, I immediately thought of the perfect occasion to try it - my Baby Shane's first birthday party! :-) 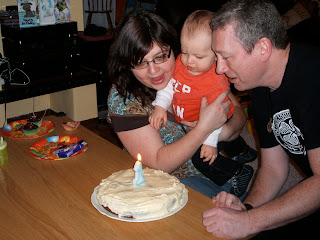 Yes, that's right, Shane is now officially a toddler - and toddle he does. The cake, with it's banana goodness and lots of moisture from the added sour cream - and let's not forget the cream cheese frosting - was a huge hit with kids and adults alike. Lovely for a Sunday afternoon, no matter what age group you've invited. Thanks Elise! 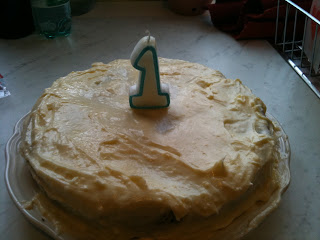 But - as you can from the photo, the banana cake is one of those 'proper' round cakes so I couldn't cut it open and see if it baked properly and all that... so I also made these vanilla cupcakes. It's a Martha Stewart recipe for plain cupcakes, which is just what I wanted. I frosted them with ready-made chocolate frosting and they were good, though not as good as the banana cake! 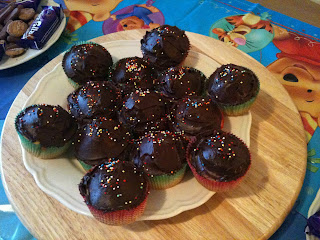 I am SO proud of myself for making Shane's first birthday cake from scratch. That's some serious Mommy behavior, I guess I'm growing into the part. :-)
Posted by joanna at 12:07 PM

Awww :D I can't believe Shane is one. It feels like it was only yesterday that you first told us you were pregnant! How quickly they grow up :P

I am glad your tried & enjoyed the cake! I firmly believe you can't go wrong when cream cheese frosting is involved.

Good for you on your baking success. Congrats on making Shane's birthday cake from scratch--an annual tradition?

This sounds like a wonderful celebration all the way around. Cake from scratch is such a great way to celebrate. Congratulations on the one year anniversary of baby and mommy.

Happy Birthday to Shane!
Those goodies look so yummy! :)

Aw, such a cutie! Happy birthday to your little one. You did a wonderful job with the treats :)

So sorry I couldn't be there and taste the cake... and of course celebrate :)

I'm still set on cooking something this weekend!

Nymeth - I know, it goes SO quickly!

Elise - Hey, that cream cheese thing is my new motto! :-)

Beth - I hope I can keep it up! Although I'm sure he'll be requiring more and more complicated cakes as he gets older...

Margot - Thank you! It really did feel special!

Melody - they really, really were yummy! :-)

Haha! I absolutely love this. Elise is my cousin so I'm thrilled about all the sharing and baking!

I've had a crazy month but I'm drafting my recipe post right now--get it up just in the nick of time!

Great job with all that baking. I don't think you can go wrong with a banana cake, ever.

Trish - your cousin? wow, how cool!

Yes--both Michelle and Elise are cousins. :)