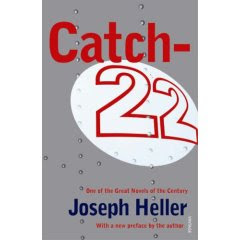 I feel very accomplished after having finished this book. Joseph Heller's Catch-22 is not easy to get through... I realise that it took him 10 years to write, but, at 576 pages, perhaps it was a tad long...

I enjoyed many parts of it, I enjoyed some parts of it very much. Sometimes I felt frustrated. Sometimes I felt bored. Sometimes I laughed out loud at the absurdity of it all. At times I was engrossed in what was going on and at times I yearned for something lighter or at least for something different. Is this how a soldier would feel during a war? Maybe. I know that the book is very anti-war and perhaps all these emotions were exactly what was supposed to happen.

The story takes place during World War II in Italy and is told from the point of view of American soldiers. It is written in a very specific style that sometimes got to be too much. But should I complain? I guess the war itself also 'got to be too much' for those involved.

The term 'catch-22' which is now in popular use really explains the whole atmosphere and tone of this book. The idea of going around in circles does say a lot about the futility, absurdity, senselessness of war.

Would I recommend it? Yes. Was I riveted? No. But it's worth reading anyway, both for the unique style and for the ideas presented. It goes into my 4-star basket - which is where the good books go, it seems to take a lot for me to give more stars!

Nice multi-tasking with one book! Good job! :-) I have this on my Spring Reading list, so I'll get to it pretty soon. I'm glad to have your review as a preview!

Hope you enjoy it, it's a strange one!

Bravo! I only made it to page 10 on this one! I've always wondered if it would be worth it to try again. After reading your review, maybe I will.