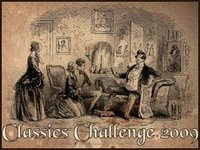 Trish is hosting the Classics Challenge again and she's right, I really can't resist. I enjoyed this last year and since I want to read more classics anyway, this is certainly the right way to go.

There are several options and I'm choosing to read 6 classics + one modern classic between 1 April and 31 October 2009. To sign up and for detailed info, visit the challenge post.

The Count of Monte Cristo by Alexandre Dumas (re-read)
The Little House on the Prairie by Laura Ingalls Wilder
Little Women by Louisa May Alcott (re-read)
Lord of the Flies by William Golding
Mrs Dalloway by Virginia Woolf
War and Peace by Leo Tolstoy
Nineteen Eighty-Four by George Orwell
Pollyanna by Eleanor H. Porter
Uncle Tom's Cabin by Harriet Beecher Stowe
Watership Down by Richard Adams
Wuthering Heights by Emily Bronte (re-read)
The Picture of Dorian Gray by Oscar Wilde
Pride and Prejudice by Jane Austen
Dracula by Bram Stoker
The Adventures of Tom Sawyer by Mark Twain
The Good Earth by Pearl Buck
The Wind in the Willows by Kenneth Grahame
War of the World by H.G. Wells
Riders of the Purple Sage by Zane Grey
Gentlemen Prefer Blondes by Anita Loos
A Mysterious Affair at Styles by Agatha Christie
A Study in Scarlet by Arthur Conan Doyle
A Midsummer Night's Dream by William Shakespeare
The Little Prince by Antoine de Saint-Exupery

Possibilities for the "Should be/Will be Classics" Bonus
A Thousand Splendid Suns by Khaled Hosseini
A Prayer for Owen Meany by John Irving
Dune by Frank Herbert
Slaughterhouse-Five by Kurt Vonnegut
The Handmaid's Tale by Margaret Atwood
Posted by joanna at 9:42 AM

Still trying to decide what to read for this. I like your lists, though!

I haven't made any decisions, these are just books that I already own or have access to... I wanted to keep my reading more free this year. Looking forward to seeing your choices!

Muh hahahahah! :) Great list!! I can't wait to see what you end up reading for teh challenge. I haven't made my list either, but some of yours are also my potentials (Dracula, Tom Sawyer 1984). Enjoy and thanks for joining again.