Project: Fill in the Gaps 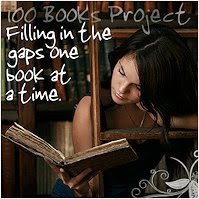 Although I read a lot and consider myself fairly well-read, there are still many books that I never got to and I wish I had. In fact, there are still books that I'm slightly embarassed about not reading. I know that sounds silly but there you have it. So, this 'Fill in the Gaps' project really appealed to me.

The project is hosted by Moonrat at Editorial Ass and it has its own blog. The point is to make a list of 100 books that you want to read in order to fill some sort of reading gap and read 75% of them in the next five years. Check it the dediacted blog to see other people's lists, they're interesting.

My list is below. It includes mostly classics - books that a book lover like me should at least try to read. I know that some of them will be boring but I need to try.

1. War and Peace by Leo Tolstoy
2. Anna Karenina by Leo Tolstoy
3. Quo Vadis by Henryk Sienkiewicz
4. The Idiot by Fyodor Dostoyevsky
5. Crime and Punishment by Fyodor Dostoyevsky
6. Love in the Time of Cholera by Gabriel Garcia Marquez
7. 100 Years of Solitude by Gabriel Garcia Marquez
8. The Plague by Albert Camus
9. Madame Bovary by Gustav Flaubert
10. Lolita by Vladimir Nabukov
11. The Lord of the Rings by J.R.R. Tolkien
12. Les Miserables by Victor Hugo
13. The Grapes of Wrath by John Steinbeck
14. The Poisonwood Bible by Barbara Kingsolver
15. The Unbearable Lightness of Being by Milan Kundera
16. The Name of the Rose by Umberto Eco
17. Pride and Prejudice by Jane Austen
18. Sense and Sensibility by Jane Austen
19. Jude the Obscure by Thomas Hardy
20. The Mayor of Casterbridge by Thomas Hardy
21. Tess of the D'Urbervilles by Thomas Hardy (re-read)
22. Brave New World by Aldous Huxley
23. Heart of Darkness by Joseph Conrad
24. The Count of Monte Cristo by Alexandre Dumas
25. 1984 by George Orwell
26. The Picture of Dorian Gray by Oscar Wilde
27. Middlemarch by George Elliot (re-read)
28. The Mill on the Floss by George Elliot
29. Rebecca by Daphne du Maurier
30. Frankenstein by Mary Shelley
31. Dracula by Bram Stoker
32. Midnight's Children by Salman Rushdie
33. Gone with the Wind by Margaret Mitchell
34. Great Expectations by Charles Dickens
35. David Copperfield by Charles Dickens
36. A Christmas Carol by Charles Dickens
37. The Divine Comedy by Dante
38. The Scarlet Letter by Nathaniel Hawthorne
39. The Adventures of Tom Sawyer by Mark Twain
40. The Adventures of Sherlock Holmes by Sir Arthur Conan Doyle
41. Vanity Fair by William Makepeace Thackeray
42. Portrait of a Lady by Henry James (re-read)
43. Treasure Island by Robert Louis Stevenson
44. Dr. Jekyll and Mr. Hyde by Robert Louis Stevenson
45. Dune by Frank Herbert
46. The Woman in White by Wilkie Collins
47. Flowers for Algernon by Daniel Keyes
48. The Fountainhead by Ayn Rand
49. The Master and Margarita by Mikhail Bulgakov
50. The Namesake by Jhumpa Lahiri
51. On the Road by Jack Kerouac
52. Don Quixote by Miguel de Cervantes Saavedra
53. Moll Flanders by Daniel Defoe (re-read)
54. Robinson Crusoe by Daniel Defoe
55. Gulliver's Travels by Jonathan Swift
56. Dangerous Liaisons by Pierre Choderlos de Laclos
57. Ivanhoe by Sir Walter Scott
58. Last of the Mohicans by James Fenimore Cooper
59. something by de Balzac
60. Journey to the Centre of the Earth by Jules Verne
61. Around the World in Eighty Days by Jules Verne
62. Nana by Émile Zola
63. The Island of Dr. Moreau by H.G. Wells
64. The War of the Worlds by H.G. Wells
65. The Awakening by Kate Chopin
66. The House of Mirth by Edith Wharton
67. A Room With a View by E.M. Forster
68. Siddhartha by Herman Hesse
69. The Trial by Franz Kafka
70. To the Lighthouse by Virginia Woolf
71. Mrs. Dalloway by Virginia Woolf
72. Lady Chatterley’s Lover by D.H. Lawrence
73. Doctor Faustus by Thomas Mann
74. I, Robot by Isaac Asimov
75. Stranger in a Strange Land by Robert Heinlein
76. The Iliad by Homer
77. As I Lay Dying by William Faulkner
78. The Golden Notebook by Doris Lessing
79. The Republic by Plato
80. I, Claudius by Robert Graves
81. Through the Looking Glass by Lewis Carroll
82. Poems by Emily Dickinson
83. something by Iris Murdoch
84. Unaccustomed Earch by Jhumpa Lahiri
85. Unless by Carol Shields
86. The Hobbit by Tolkien
87. The Good Earth by Pearl Buck
88. The Satanic Verses by Salman Rushdie
89. Candide by Voltaire
90. Collected Stories by Anton Chekhov
91. The Bell Jar by Sylvia Plath
92. The Book of Illusions by Paul Auster
93. Generation X by Douglas Coupland
94. The Stranger by Albert Camus
95. tbd
96. tbd
97. tbd
98. tbd
99. tbd
100. tbd
Posted by joanna at 9:00 AM

That looks like the sort of list I should read! Maybe in a few years time I'll try to do a similar thing, but for now I think I can only manage about 5 classics a year. Good luck with your project!

I've seen this around so many times and it's hard to resist! Really it might just be fun to make a list of 100 books. :) Enjoy! You've got some great ones on the list (and also some ones I'm petrified of...like #1 and #12)

Awesome list, Joanna! You'll have fun working through this one!

farmlanebooks - you don't have to put only classics on your list, it can be gaps in modern lit that you want to fill too, it can be a mixture, whatever you want it to be. Oh go on, you know you want to! :-)

Trish - Indeed - I had a great time making this list! And yes, I'm petrified of those long heavy ones too... how much are we betting that I'll start with something like the Tolkien? ;-)