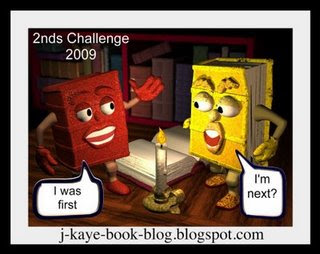 J. Kaye from J. Kaye's Book Blog is hosting this one too (boy, will she be busy in 2009!). The 2009 Seconds Challenge requires us to read 12 books by authors we've read only once, between 1 January and 31 December 2009. For all the details, check out the challenge post.

Since most of the books I read in 2008 were by new-to-me authors, I have a huge list already! I'm only listing possibilities though and it's likely that I'll be adding to the list as other ideas come to me...

something by Cecilia Ahern
The Second Summer of the Sisterhood by Ann Brashares
The Princess Diaries by Meg Cabot (I read Queen of Babble)
Through the Looking Glass by Lewis Carroll (I read Alice's Adventures in Wonderland)
Undead and Unemployed by MaryJanice Davidson
Shadows in Bronze by Lindsey Davis
something by J.M. Coetzee
Murder on a Bad Hair Day by Anne George
something by Laurie Halse Anderson
A Thousand Splendid Suns by Khaled Hosseini
Two Caravans by Marina Levycka
Vegan, Virgin, Valentine by Carolyn Mackler (I read The Earth, My Butt and Other Big Round Things)
Ombria in Shadow by Patricia McKillip
something by Donna Jo Napoli
Her Fearful Symmetry by Audrey Niffenegger (I read The Time Traveller's Wife)
Redemption Falls by Joseph O'Connor
Salem Falls by Jodie Picoult
Sorceress by Celia Rees
something by Carlos Ruiz Zafon
Everything is Illuminated by Jonathan Safran Foer (I read Exceptionally Loud and Incredibly Close)
something by Jane Yolen
Sweethearts by Sara Zarr (I read Story of a Girl)
I am the Messenger by Markus Zusak
Posted by joanna at 3:29 PM

LOL! Yes, I think I am going to be super busy, but oh won't it be fun?

Glad you have you join in the madness too. :) Book challenges are a blast!

I can't resist - and I think I'm signing up for 99% of the ones you're hosting too! I love these challenges!

Joy at Thoughts of Joy takes the credit for most of them. She originally hosted this one and the 1st challenge - along with a few others. She decided to not host challenges this coming year and I took over the ones I'd planned on joining. I'd planned on 2009 to be my year of book challenges....and by the looks of it, the plan worked...lol!