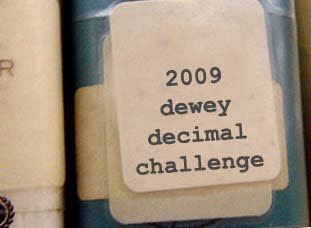 I don't read as much non-fiction as I'd like to so I want to sign up to some non-fiction challenges as well. This one, hosted by The Novel World, seems really varied and fun, so I'm in. The challenge is to read one book from each section of the system. It runs from 1 January to 31 December 2009.

I'm only listing possibilities for each section, no final choices yet!

100 - Philosophy and Psychology
How to Win Friends and Influence People by Dale Carnegie (158.1)
The Speed of Trust by Stephen M.R. Covey (174.4)
Blink by Malcolm Gladwell (153 - Mental processes and intelligence)

400 - Language
The Language Instinct: How the Mind Creates Language by Steven Pinker (400)

500 - Natural Sciences + Math
Elephants on Acid and other bizarre experiments by Alex Boese (500)
A Beginner's Guide to Constructing the Universe: Mathematical Archetypes of Nature, Art, and Science by Michael S. Schneider (516.001)

700 - The Arts
The Structure of Singing: System and Art of Vocal Technique by Richard Miller (782)
Into thin Air by Jon Krakauer (796)

800 - Literature and Rhetoric
The Seven Basic Plots: Why We Tell Stories by Christopher Booker (809.924)
We Thought you would be Prettier by Laurie Notaro (814.6)

I like the looks of this one!! Thanks for bringing it to my attention!
Lezlie

I thought you might Lezlie! :-) I'm be curious to see your choices, I still can't find anything for the first category!

What a great idea for a challenge! I certainly don't read enough non fiction to assemble a list for this one, but it would be fun to try (not necessarily to read them!)

raidergirl - I must admit it was fun trying to find a book or two for each category. :-)